Bethlehem, March 5, 2013:- Water and Environmental Research Department head by Jane Hillal of the Applied Research Institute Jerusalem (ARIJ) have concluded a series of EU member-states representative briefings on the water status and rights of the Palestinian communities in the occupied Palestinian territories.


The visit was conducted as part of the ongoing cooperation between ARIJ – as part member of the EWASH advocacy committee – and the Emergency Water and Sanitation / Hygiene collation (EWASH), representing the civil society community in the oPt in the conducted meetings.

The Israeli monopoly over the Palestinian water resources, which came under the pretext of the unfulfilled phases of the peace process, was one of major indicators that were noted in those meetings with the respectful EU member-state representatives. “ 20 years of peace process deadlock since the signature of the Oslo Accords have seen Palestinians moving further away from realizing their water rights ” as noted by EWASH representatives to the EU. 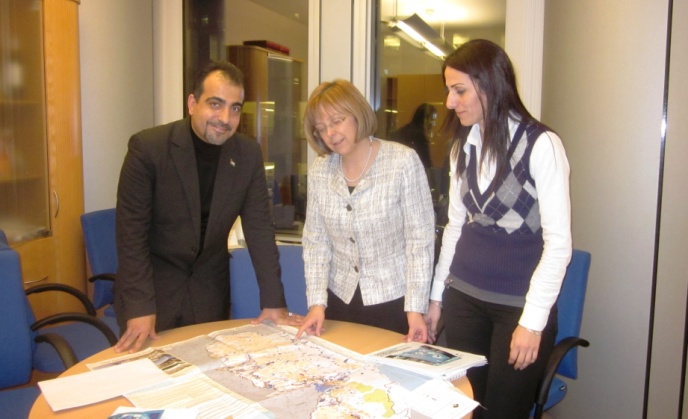 Representatives of the EU member-states were also updated on the water status; difficulties of accessing and management of natural national and other shared regional water resources faced by the Palestinian people as a result of the ongoing internationally recognized illegal occupation of Palestinian territories.

All mentioned previously have resulted in the abuse of the water status undermining “water” as a basic human right. Such abuse over the years have resulted in the increase of water insecurity for the Palestinian population, meanwhile the Israeli authorities announced plans to increases the illegal Jewish only settlements water allocation by 20 percent.

EWASH called upon the EU member-states to “Review economic relations with Israel to ensure they conform with third state obligations vis-à-vis the Palestinian people and that these relations do not recognize, aid or assist in the violations of Palestinian water rights”.

The meetings also highlighted the grave effects caused by the Israeli policies and practices against the development and sustainability of the water sector mainly in the areas categorized as area “C”, which represents 60 percent of the West-Bank space. “209 water related infrastructure belonging to the Palestinian communities” were demolished since the year 2009 as highlighted in the meetings. Thus for calling on the EU member-states to “refrain from recognizing Israel’s illegal permit & planning regime in area C”.
EU member-states were also noted on the unstable water status in the blockaded Gaza Strip, the coastal strip which is poor with sources of water and with a sole resource of Coastal Aquifer which is unstable for human consumption. Therefor calling on the EU member-states to promote an integrated approach of water management between Gaza and the West-Bank.