The Applied Research Institute – Jerusalem (ARIJ) through the Good Governance Department (GG) and the Palestinian Anti-Corruption commission (PACC) held a joint workshop in Al-Ram municipality regarding the Palestinian anti-corruption law and social accountability. 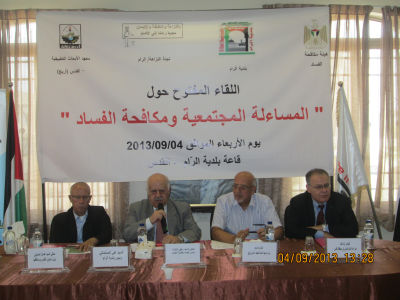 Under the signed MoU between ARIJ and PACC the municipality is encouraged to adopt the Palestinian National Anti-Corruption Strategy. ARIJ’s General Director Dr. Jad Issac and PACC commissioner Mr. Rafiq Natsheh addressed Al-Ram citizens on the issue of anti-corruption legislation and linkages between anti-corruption and social accountability.
While addressing the audience of the five villages surrounding Al – Ram both Dr. Issac and Mr. Natsheh stressed the importance of the role of citizens to fight corruption and participate and local governing matters.

Mr. Natsheh addressed the audience saying: “As recently formed as PACC is, we are very proud to be miles ahead of similar organizations in neighboring countries regarding fighting corruption. However, PACC can only accomplish a corruption-free Palestine when successfully collaborating with people like you”.