Bethlehem, May 14, 2013 — International bodies, EU Consul Generals, Arab and Western states and other various countries Representatives in the oPt were briefed on the latest Israeli geopolitical violations within the occupied Palestine. During a brief on Monday the 13th of May, a regular briefing that comes as part of the Applied Research Institute Jerusalem |ARIJ| activities under project titled “Monitoring Settlement Activities in the Palestinian Territories”.

An audience of concerned stakeholder of politicians and representatives listened to ARIJ’s General Director Dr. Jad Isaac as he elaborated on the expansions and violations that have occurred in the oPt and their effect on the prospects of achieving the two state solution; Changes and challenges that also undermine the livelihood of indigenous people living in the occupied territories.

Isaac highlighted growing number of violation and attacks carried out by the settlers in the occupied territories targeting Palestinian property and religious institutions and places, Muslims and Christians alike.

The report presentation given by Dr. Jad explored settlements expansions that come under the myth of the so-called “natural growth”. The report has noted the growth taking place at settlement of Har Gilo and in Modien Elit along other locations summing up to a number of 17,000 housing units that have been proposed by official bodies by the occupying power administration.

The briefing noted on the recent developments related to military orders that have been received by the civil population living under Israeli occupation, of house demolitions or land confiscations aiming to complete to building of the Israeli segregation wall. The case of the Cremisan Christian Monastery located in Bethlehem was pointed out after the Israeli appeals committee have refused to consider appeals by the Christian community to save their lands and stop the segregation of their church from the community. 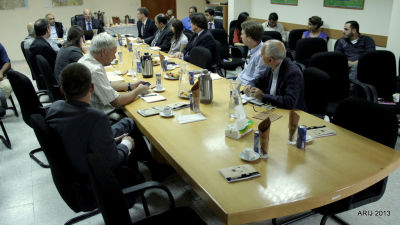 Recent developments & updates evacuation on Palestinian communities of their lands under the pretext of state owner of the occupied territories thus relocating those lands for military use as training firing zone within the Jordan Valley. The briefing also highlighted the updates on Ush-ghurab of Biet-Sahour and Makhrour Valley of Biet-Jala, were growing concerns of Israeli expansions and segregation policies towards both areas are growing.

The briefing concluded with highlighting the Israeli planes for expanding transportations plans in the occupied territories that would limit if not kill any hopes for future Palestinian urbanization development that is needed to address the growing number of population. One example that was presented as a case study was of Biet-Safa east of Jerusalem and how the Israeli occupying power proposed route number 4 ( route 50 ) would end any possibility of urban development and contiguity for this community .

The brief was concluded with several questions by the respectful delegates, mostly related to the Israeli plans of expansions of illegal settlements within 1967 borders and on its effects on the possibility of achieving the international supported formally of the tow state solution and livelihood of the local population.