Bethlehem March 28th, 2013:-The Applied Research Institute-Jerusalem (ARIJ) have hosted a focus group discussion on the future spatial development of Bethlehem, Beit-Jala, and Beit-Sahour twin cities, and included several representatives of the three targeted municipalities and other stakeholders.

The meeting was inaugurated by Dr. Jad Isaac, Director General of ARIJ, where he pointed out the purpose of this meeting and its importance at this time to discuss the future of Bethlehem area, against the dismal geo-political background that Bethlehem is facing. 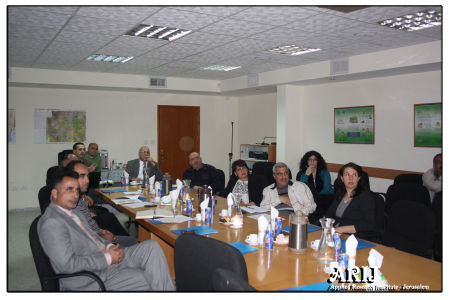 The meeting was designated to discuss the findings of the doctorate research of Mr. Ahmad El-Atrash. This research has been done at the bequest of ARIJ, and avails technical supervision from the Faculty of Spatial Planning at TU-Dortmund University, Germany, along with financial assistance from the German Academic Exchange Service (DAAD).

The mayors and city planners of the three mentioned cities, along with the Director and Head of Planning and Regulation Department at Bethlehem Local Government Directorate were the key participants of this meeting joined by representatives from the Center for Cultural Heritage Preservation in Bethlehem and UNRWA office in Bethlehem, as well.

Afterwards, Mr. El-Atrash, a PhD candidate at TU-Dortmund University has presented the main findings of his doctorate research and the main policy recommendations, as resulted from the consultation with the city planners of Bethlehem area. “The feasible alternatives for the three cities to develop in a sustainable manner can be achieved by considering an integrated and comprehensive spatial development at the governorate level, where the eastern, western, and southern zones are organically included in future spatial development”, noted El-Atrash. 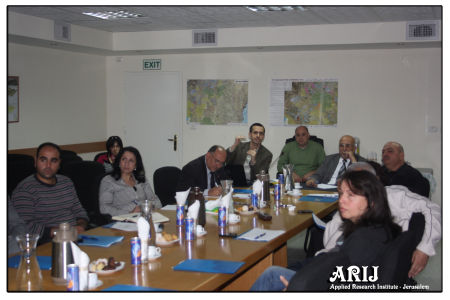 An open and thriving discussion was followed by Mrs. Vera Baboun, Dr. Nael Salman, and Mr. Hani Al-Hayik the mayors of Bethlehem, Beit Jala, and Beit Sahour municipalities, along with Mr. Rashid Awad, the director of Bethlehem Local Government Directorate. In tandem, Eng. Hannan Manoly the city planner of Beit Sahour Municipality, Arch. Samia Zeit the city planner of Beit Jala, and Eng. Anwar Shbaneh the head of engineering and regulation directorate at Bethlehem Local Government Directorate, have shared their feedback on the dally challenges facing the three cities within Bethlehem Governorate and echoed the policy recommendations based on the findings of the doctorate research.

Finally, it was agreed to follow-up with the recommendation of setting up a joint working group from the three municipalities, Bethlehem Local Government Directorate and coordinated by ARIJ.