Inflating Israeli Settlements Enterprise In Pose of the Peace Process

This report overviews Israeli occupation activities in the West Bank between June 18th 2014 and April 31st 2015 and highlights recent examples indicative of these practices. By documenting on-going Israeli policies to fragment and enclave Palestinian land, expand illegal settlements, and encumber Palestinian movement and access within the West Bank, this documentation presents Israeli actions in contrast to declarations of negotiation and serious intent issued by Israeli leaders to come to a lasting agreement. In exposing this inconsistency, the compiler hopes to demonstrate that Israeli diplomatic intent is artificial and antithetical to the activities on the ground.

During the designated time of the report (June 2014 and April 2015), the Applied Research Institute – Jerusalem (ARIJ) documented 678 instances of Israeli settler attacks on Palestinians, their sites, and property. 9,782 trees uprooted, 255 Israeli military orders were issued, along with 49 tenders to build in 16 Israeli settlements in the occupied Palestinian territory (oPt). These tenders included the building of 6,455 housing units. For a full exhaustive report on these numbers and cases, refer to “On Israeli Violations in the oPt” This material was originally prepared for ARIJ’s presentation to the European Union delegation on June 2nd 2015. 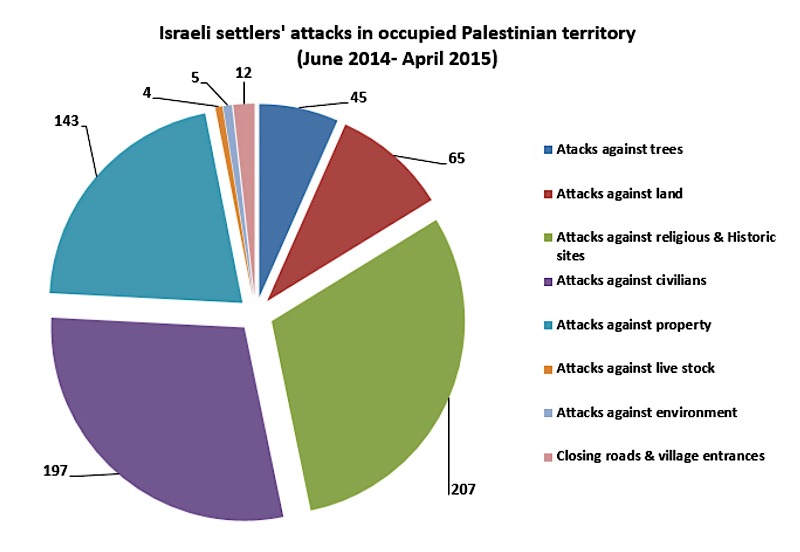