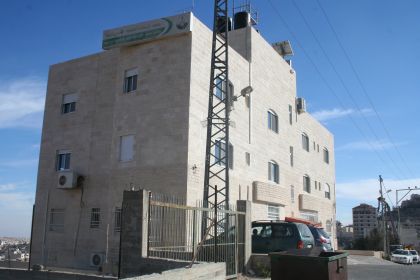 In addition to offices, the building has a multi-purpose room that can be utilized as a meeting or video conference room. It also has four fully equipped labs; Honey Bees Queen Rearing Center and Bee Keeping Lab, Water and Environment Lab, Air Quality lab, Seed Technology Lab and a Weather Station . Among extra functions, the GIS department has a specialized training room, while the Water & Environment Department runs a factory for making small scale waste water treatment units. It is also worth mentioning that the third floor in the building is lightened using solar panels.

Insuring adequate building facilities to provide office space for its growing number of employees, and facilitate the performance of its activities has been a major sustainability challenge for ARIJ. Through expanding its resource mobilization efforts, ARIJ managed to complete the first two floors in the year 2006. During 2008, two additional floors were added, which were furnished during the last couple of years. ARIJ has managed to complete the entire building with the efforts of its staff and management, depending mainly on its own resources but with the help of its many friends. In this occasion, ARIJ would like to thank all those who have contributed to the completion of its Bethlehem premises: