ARIJ signs an MOU and a joint cooperation with T.E.F group from the Czech Republic

ARIJ signed a memorandum of understanding and future cooperation with the T.E.F group from the Czech Republic, who are visiting Bethlehem to participate in the Czech Industries Exhibition and the annual International Peace Festival in Beit Jala. According to the signed TOR, both parties will be working in the near future to start the proceedings of drafting the terms of mutual agreement, which includes the establishment of a joint Palestinian Czech company to operate in the areas of technology, environment, water & waste water treatment, renewable and alternative energy, transportation, food processing, scientific research and studies related to the scope of work of both parties. This will lead eventually to adoption of technology from the Czech Republic’s specialized companies in Palestine. 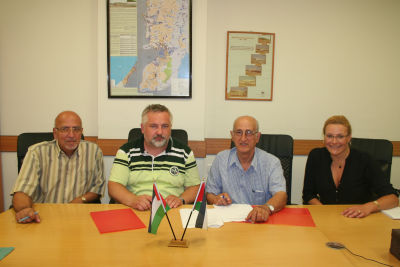 The agreement was signed by Dr. Nasri Qumsieh ARIJ Chairman of the Board in the presence of Dr. Jad Isaac, Nader Hremat, Fahed Abu Saima and Raed Abed Rabbo.
From the T.E.F group side the agreement was signed by Chairman of the Board of Directors Mr. Veit Kraus in the presence of a number of members of the Czech delegation, including Ms. Veronica Choteborska and Eng. Nimer Shbat.
As part of this MOU both parties will work register a joint company to invest and work in the state of Palestine in the areas of common interest between the two parties, benefitting from the expertise and advanced technology in the Czech Republic. 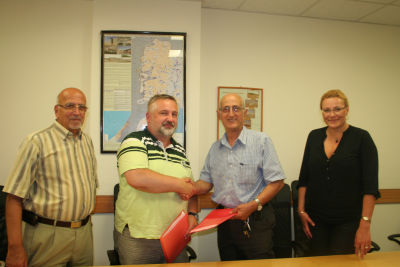 It’s worth mentioning that this is the first agreement of its kind to be signed between the state of Palestine and the Czech Republic to work jointly and invest in the fields of environmental technology and the development of water resources in Palestine and ARIJ hopes through this work to develop and introduce many new technologies that will enable the Palestinians to exploit the optimum water resources, especially because of the deprivation of fresh water for citizens in summer time due to Israeli control over Palestinian water resources in addition to climate change, which threatens the Arab region more than other areas in the rest of the world .