Bethlehem May 20, 2013:- The Applied Research Institute – Jerusalem (ARIJ) has issued a Periodic Violations’ monitoring report, the main focus of which is on documenting violations resulting from the presence and growing expansion of illegal Israeli settlements in the occupied Palestinian territories.

The 46 page report titled “Israeli Settlers’ Violations In the occupied Palestinian Territory” narrates documented incidents of Israeli settler attacks against Palestinian civilians and their properties. As noted in the report; “The settlers’ premeditated attacks have grown over the past decade in number, and also in types of attacks, which have grown more violently than even the Palestinians expected over the years.”

Attacks, which are noted in the report and also illustrated in graphs that show the numbers of Palestinians affected, time eras and areas of attacks against civil populations. For example, one result illustrates that the peak in numbers of attacks during the ear of reporting was noted in March, with 72 recorded attacks. March 2013 was the month that witnessed a wave of international and regional diplomatic initiatives inaugurated by U.S. President Barack Obama’s visit to the region, which somewhat ironically was geared towards an attempt to revive support for the two state solutions, “Peace Process”.
“The Israeli settlers’ attacks on Palestinian and their properties in the occupied Palestinian territory remains to be a main concern especially that such attacks are disregarded by the Israeli occupation Army; in fact much of such attacks are carried out under their protection and direct sight.”

The report also shows that the geographical target of most settlers’ attacks was found in Nablus district which houses over 13,313 illegal Israeli settlers allocated in 12 illegal settlements, 13 illegal outposts out of, a small number out of the total 196 illegal settlements and 232 illegal outpost built throughout the occupied Palestinian territory.

The report highlights the different characters of settler attacks. The majority of documented attacks target first the Palestinian population’s means of mobility. The second most frequent type of settler aggression is targeted towards Palestinian homes and/or shelters, whilst the third looks to destroy= farm lands and ancient olive trees. These documented attacks draw local and international attention to the systematic targeting of Palestinian communities’ existence and livelihoods,’ by illegal Israeli occupation forces. 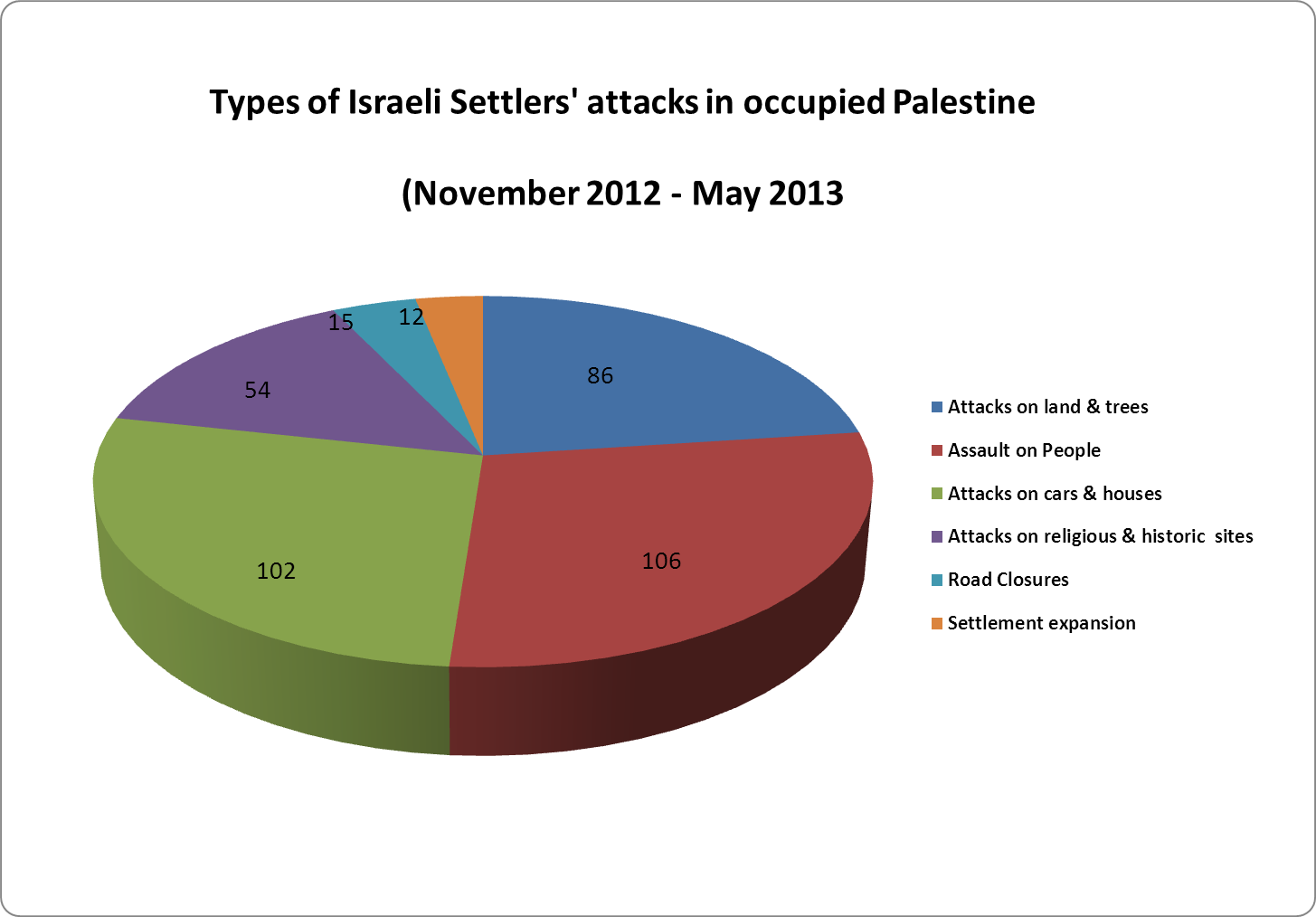